A new campaign is raising awareness about silent 999 calls, for when you need to ask for help but can’t speak.

The new campaign, launched by the Independent Office for Police Conduct, aims to make more members of the public aware of the Silent Solution system.

The system enables a 999 mobile caller who is too scared to make a noise or speak to inform police they are in a genuine emergency by pressing 55 when prompted.

Although it’s been in operation since 2002, many don’t know about it as the instruction is only detected in one per cent of all silent calls put through to the system.

Regional director Catrin Evans said: ‘It is always best to actually speak to a police call handler if you can, even if by whispering, but if you are putting yourself or someone else in danger by making a sound, there is something you can do.

‘Make yourself heard by coughing, tapping the handset or – once prompted by the automated system – by pressing 55.’ 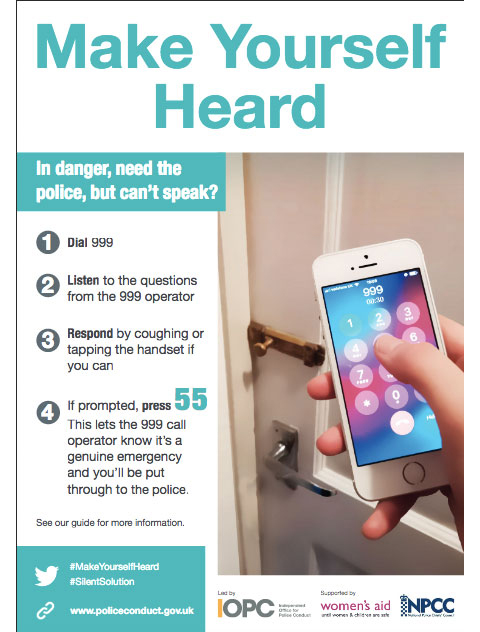 What you should do if you need to ask for help but can’t speak (Credit: IOPC Handout)

The campaign is being supported by the family of murder victim Kerry Power, who was strangled by her ex-partner after he broke into her house.

Kerry’s family said: ‘Happy, fun-loving and considerate are all words you could use to describe Kerry, however the one thing everybody would mention first would be that she was the consummate mum.

‘After a split from her son’s dad and a tough few years, things were on the up, Kerry was back to her old self and was looking forward. Unfortunately this was all brought to an end by the brutal actions of her ex-partner in December 2013.

‘After weeks of stalking and inappropriate behaviour, he broke into Kerry’s house with a key he had previously had cut, unable to accept her decision to end their relationship. As things escalated Kerry became worried for the safety of herself and her son, who was asleep upstairs and called 999.

‘Although she was not able to speak for the fear of alerting the intruder to her actions, she followed the advice given by a police officer during an earlier visit; that she could call and not speak, as the police held her details they would be alerted and attend.

Kerry sadly passed away after her call was dismissed as not genuine because she couldn’t ask for help (Credit: IOPC)

‘Unbeknown to Kerry, this was fiction and nobody came… a short while after the call, she was strangled.’

The Make Yourself Heard campaign is also being backed by Women’s Aid, who consider it to be an incredibly useful tool for women who might themselves in dangerous situations where they need help but can’t speak.

Lisa Johnson, Manager of Direct Services at Women’s Aid, said: ‘For survivors of domestic abuse calling the police might be too dangerous. Many abusers will threaten to hurt or even kill them if they try to speak out about the abuse. This means that for far too long many women have not been able to access the emergency support they so desperately need from the police.

‘For a long time we have been encouraging survivors to use the Silent Solution system to make a silent 999 call if they feel it would be dangerous for them to speak to the call operator. That’s why we are pleased to work with the IOPC to help raise awareness of the system so that survivors can call 999 without putting themselves at further risk and prevent further lives, like that of Kerry Power, from being taken.’

Did you know about silent 999 calls? Head over to our Facebook page and let us know!