Kate Middleton attended her third wedding of the year today and it was thought that she would have a very important job - but turns out she managed to enjoy the ceremony away from her little ones...

Mum-of-three Kate was probably very excited to see her two eldest children Prince George and Princess Charlotte perform their special roles at Princess Eugenie’s wedding but it also comes with a little bit of pressure.

Most parents will agree that while it’s adorable to see your children dressed as a pageboy or bridesmaid, you also have the fear that they won’t behave.

Prince George and Princess Charlotte have a pretty solid record and have never played up in public before, so as predicted, Princess Eugenie’s wedding didn’t have any mishaps involving them.

It was originally thought that Kate would be in charge of keeping the young bridal party in check for Eugenie’s big day at Windsor Castle. In an interview with the Express ahead of Eugenie’s wedding, royal expert James Brookes speculated that Kate would take on the role because she did it for Prince Harry and Meghan Markle and also at her sister’s wedding last year.

James said: ‘We saw that with Harry and Meghan, Kate did step up and take a role there. So I wouldn’t be surprised if we do see her play the role of guardian as much to not only George and Charlotte to make sure they behave, but also to make sure any of the other pageboys and flower girls are on their best behaviour too.

He added: ‘So fingers crossed there’s no childcare issues on the day.’ 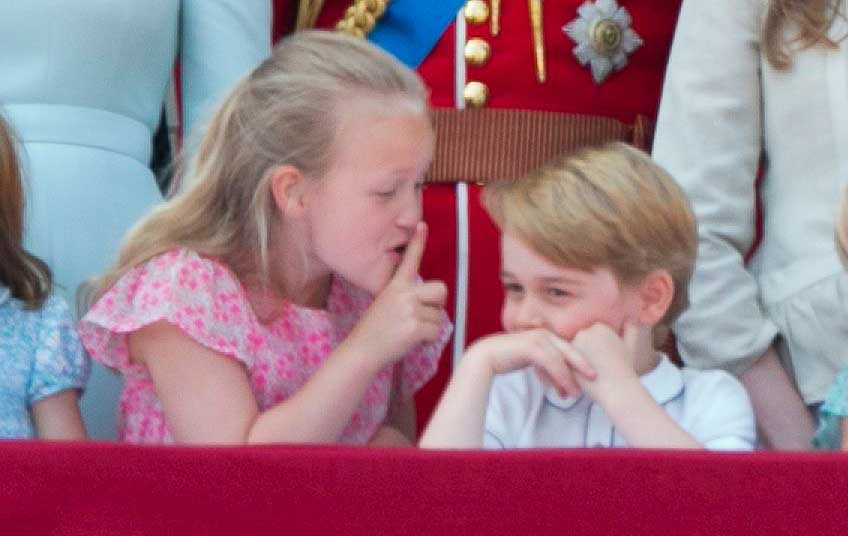 Savannah and George were pretty mischievous together at Trooping of Colour…

However, when the pageboys and bridesmaids arrived, Kate was already sat comfortably in St George’s Chapel as the Cambridge’s nanny Maria Teresa Turrion Borrallo was on hand to look after the children.

Maria was also looking after the Queen’s other great grandchildren Savannah and Isla Philips and Mia Tindall, Eugenie’s goddaughter Maud Windsor, Robbie Williams’ daughter Theodora, and Louis De Givenchy, who is the only other pageboy.

Princess Charlotte was her normal confident self and waved to the crowds from the car and steps when she arrived and Prince George looked much more at ease than the last time he was at the church!

The bridesmaids and pageboys all appeared to be very well behaved so Maria must have them all under her special spell – we wonder if any Smarties were involved this time?

Do you have any funny or embarrassing stories involving children at weddings? Head over to our Facebook page to get involved with the conversation!