Name a more versatile food. We’ll wait… Whether you blitz it in a protein smoothie, swirl it into your porridge, spread it on your toast or eat spoonfuls from the jar at 2am, peanut butter is the ultimate store cupboard ingredient. And in times of crisis? Stats indicate it’s our favourite comfort food too. But is peanut butter good for you? Healthy or hype?

In recent months, sales of peanut butter soared 163%, according to a recent report by ResearchandMarkets.com. So why the sudden surge for Sun-Pat? The study writes it’s partly down to its ‘shelf stability’ – it has a long life and will happily last months in the fridge once opened – but also down to its relatively new-found reputation as a health food, packed with good fats and high quality energy.

‘The growing trend towards meat-free products has also influenced demand for nut and seed butters,’ adds the report, ‘as they are an excellent source of plant-based protein.’

On social media, peanut butter is having a major moment. Pinterest searches for ‘peanut butter recipes’ are up 175% while the hashtag #peanutbutter has racked up a cool 5.5million mentions on Instagram alone. There’s even a recipe going viral and, heartwarmingly, it’s from 1932. This no-yeast-no-knead recipe resurfaced via an Old Recipes forum on Reddit and has been steadily gaining traction ever since.

What should I look for when buying a jar?

Before we get started, you should know that not all peanut butters are created equal, so it’s essential to read the label before you head to the checkout. Check the ingredient list for as close to 100% peanuts as possible and one that contains minimal – or better still, no – added sugar, oil and salt. Check it isn’t made with palm oil, which is particularly high in saturates and bad for the environment to boot.

Scroll down for our verdict on the best butters to buy or, if you’re not convinced about the quality of supermarket offerings, how about making your own? Our one-ingredient recipe can be made in mere minutes and tastes delicious. 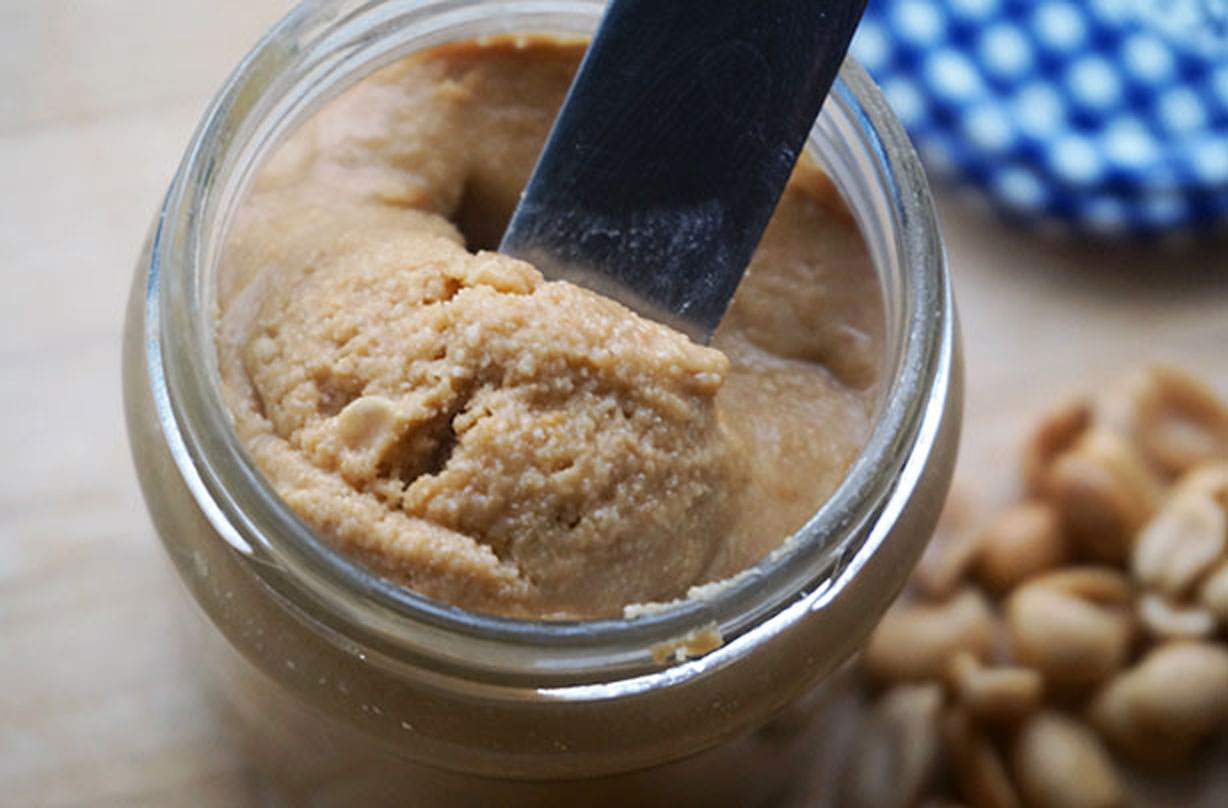 Natural Health Practitioner Emma Lesh tells us, ‘often pure peanut butter will contain the peanut skins too so look for visible red or brown flakes. These skins have been shown to be higher in antioxidants and will increase fibre levels to make the peanut butter even more nutritious’.

The health benefits of peanut butter

Is it good for weight loss?

Nutrition Consultant Frankie Phillips tells us, ‘no food can cause weight loss on its own, so no, peanut butter isn’t a magical way to lose weight, but it can be eaten as part of a balanced diet that reduces total energy, ie calories. And the deficit in energy is what helps to reduce weight.’

In just one 30g serving of peanut butter, there can be almost 200 calories and around 15g fat, numbers which (unsurprisingly) put many dieters off the sticky stuff. However, studies have shown that people who regularly consume nuts tend to have a healthier body mass index than those who don’t. Plus, peanuts are great for controlling cholesterol levels too. Many experts also credit it with the ‘satisfaction factor’. It feels indulgent, it’s packed with fibre and protein and curbs your cravings naturally, meaning that you’re less likely to make bad choices later.

Is it OK to eat peanut butter every day?

‘Whilst there’s nothing wrong with eating it every day’, explains Frankie, ‘it’s always best to eat a wide variety of foods to give the best dietary balance. You could also try other nut butters, such as Brazil or almond.’ If you do choose to eat it every day, aim for no more than two tablespoons. And for the record, there’s no nutritional difference between smooth and crunchy peanut butter. The choice is yours!

Emma Lesh tells us, ‘in moderation, peanut butter can provide a good source of protein, heart-healthy mono saturated fats and minerals such as potassium, magnesium, phosphorous and B vitamins.’

Eating peanut buuter after a workout is especially beneficial. When you’ve just put your body through its paces, it needs a boost, fast! The protein in peanuts helps with muscle recovery and repair after a gruelling gym session, while restoring your energy levels with their carbohydrate content. Nutrition website LiveStrong recommends spreading peanut butter onto a wholewheat bagel, dunking slices of apple into it, or adding it to rice cakes for a speedy post-exercise pick-me-up. That protein punch will benefit your body in numerous other ways too, strengthening your hair, skin and nails as well as your internal muscles and tissues.

Back in 2002, Harvard School of Public Health conducted a study that showed that consuming just one tablespoon of peanut butter (or 28g of whole peanuts) more than five times per week can reduce the risk of developing diabetes by 20%, and the higher the levels of consumption, the greater the preventative effect. If you already have diabetes, peanut butter is a great add to your diet. It’s classified as a low glycemic index (GI) food that won’t cause your blood sugar levels to spike and can actually stabilise them. Be sure to choose a variety with no added sugar.

Niacin, also known as vitamin B3, is excellent for improving your memory function, and peanuts are one of the best providers of niacin out there. Peanut butter has been linked to reduced cognitive decline as you age, and may even be beneficial for decreasing your chances of developing memory-related conditions such as dementia or Alzheimer’s disease.

Could peanut butter cut the risk of cancer?

In 2013, figures were published that showed teenage girls who regularly eat peanuts are 39% less likely to develop benign breast disease by the age of 30 – and while this is not a direct sign of cancer, some benign breast diseases increase cancer risk in later life. ‘These findings suggest that peanut butter could help reduce the risk of breast cancer in women,’ senior author Dr Graham Colditz said at the time. Peanut butter has also been associated with reduced risk of colon cancer in women.

Should I encourage my children to eat peanuts?

Research from the University of Houston showed that middle school children who ate peanuts or peanut butter three to four times per week were much less likely to choose unhealthy snacks than their non-nut eating counterparts. The difference in eating habits was so significant that the peanut eating participants experienced a decrease in their BMI over the course of the 12-week study. According to the researchers, peanuts promote a feeling of fullness, and are a much better alternative to ‘energy dense, unhealthy snacks’. Alternatively, whip up a batch of peanut butter flapjack as a tasty treat.

Can I use peanut butter in cooking?

Let’s take a look at the best peanut butters money can buy.

Verdict: Containing only naturally occurring sugar and 100% peanuts (with whole skins on), there’s no added salt, sugar or oil in this 5-star rated peanut butter. In a pleasingly chunky 1kg pot, it’s also great value for money. Be mindful of the £3.99 postage charge but do look out for MyProtein’s regular money off promotions.

Verdict: With 97% peanuts, the higher calorie count is primarily due to the addition of sustainable palm oil. Note the added salt too. Whilst neither are particularly healthy adds, there’s no denying they pack a flavour punch.

Verdict: We were quite surprised by this nutritional info: the lowest peanut and protein count with the highest salt and saturated fat content, plus an added E number to boot. Sun-Pat may have the benefit of brand awareness but is there the same level of ingredient awareness? We think not…

Verdict: The most expensive peanut butter we reviewed is made from ‘just-roasted high-oleic Argentinian peanuts and a sprinkling of sea salt’. Strong branding, cult following and an undeniably great taste, if money's no object, Pip & Nut's on our shopping list.

Verdict: The cheapest of the peanut butters also comes with added sugar, salt and palm oil. If you’re looking for a healthy option, this is probably one to leave on the shelf, but if you’re on a budget, there’s no denying its value.